Officials from Pimicikamak, Manitoba and Manitoba Hydro at the formal apology for hydro harms in Cross Lake, Pimicikamak territory, January 20, 2015.

On January 20, 2015, about 250 Pimicikamak citizens gathered to hear a formal apology from Premier Greg Selinger for harms caused by the hydropower system in northern Manitoba. 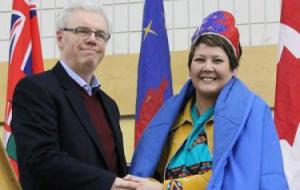